Learn the basics for creating a research poster and preparing to present your research.

When creating your poster, it can be helpful to have a friend or advisor take a look at your poster and provide feedback. As you look at these sample posters, keep the following feedback in mind: 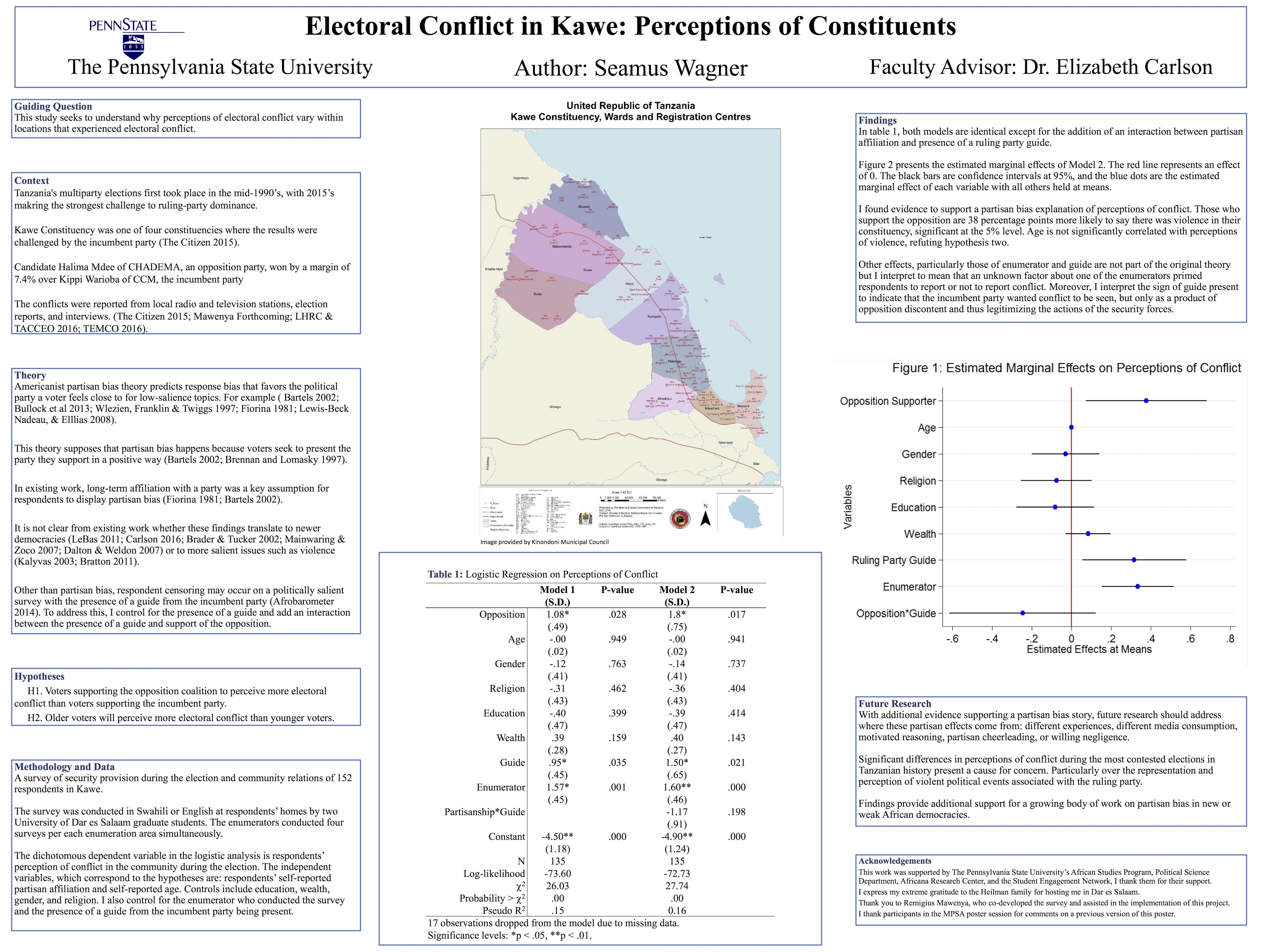 This work examines what factors influence varied perceptions of electoral conflict using a case study in Tanzania. The 2015 general elections in Tanzania, some constituencies experienced electoral conflict. Using an original survey developed in conjunction with graduate students at the University of Dar es Salaam, this paper tests perceptions of violence in Kawe, a constituency in the heart of Dar es Salaam that experienced conflict during the 2015 general elections. 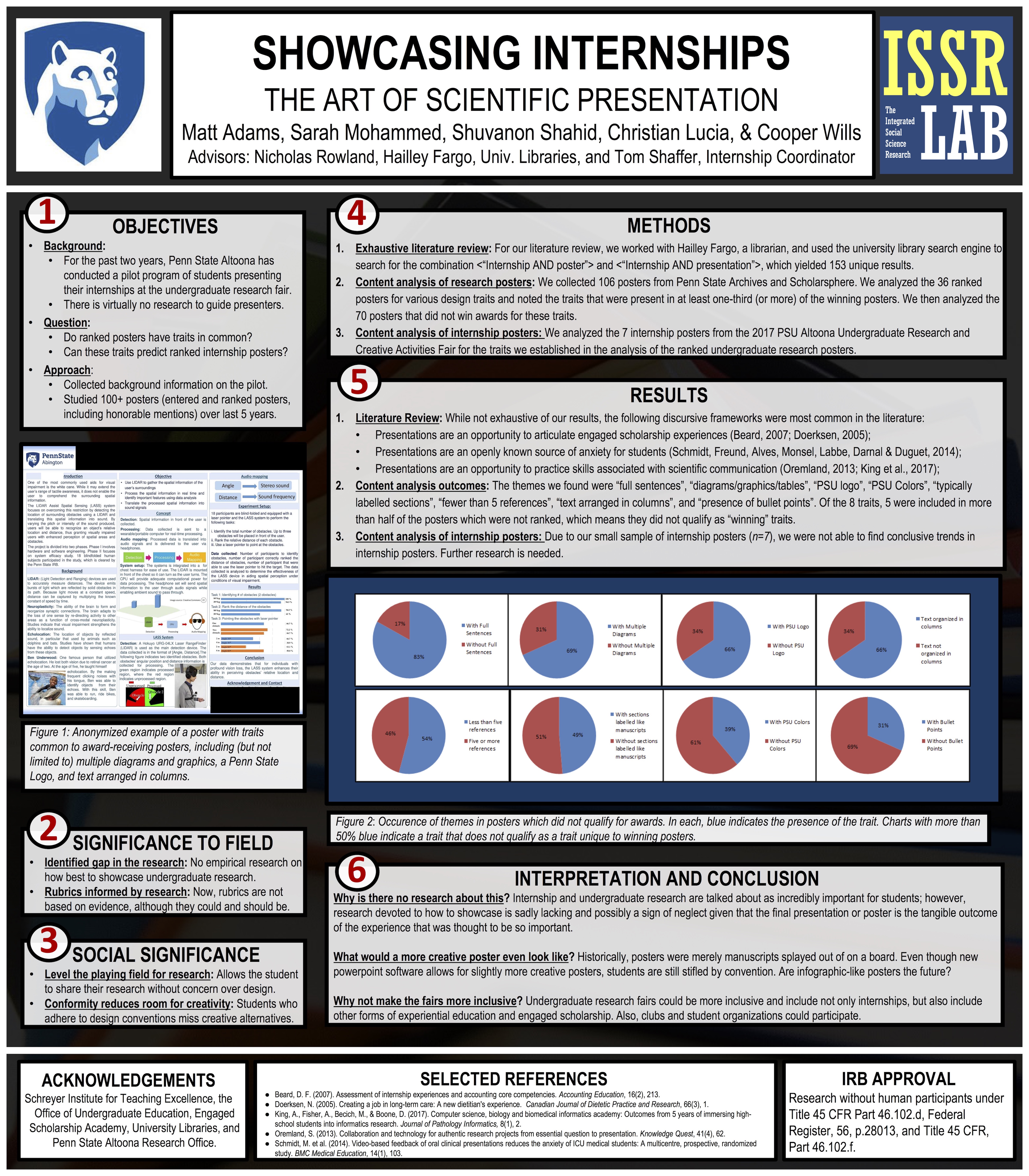 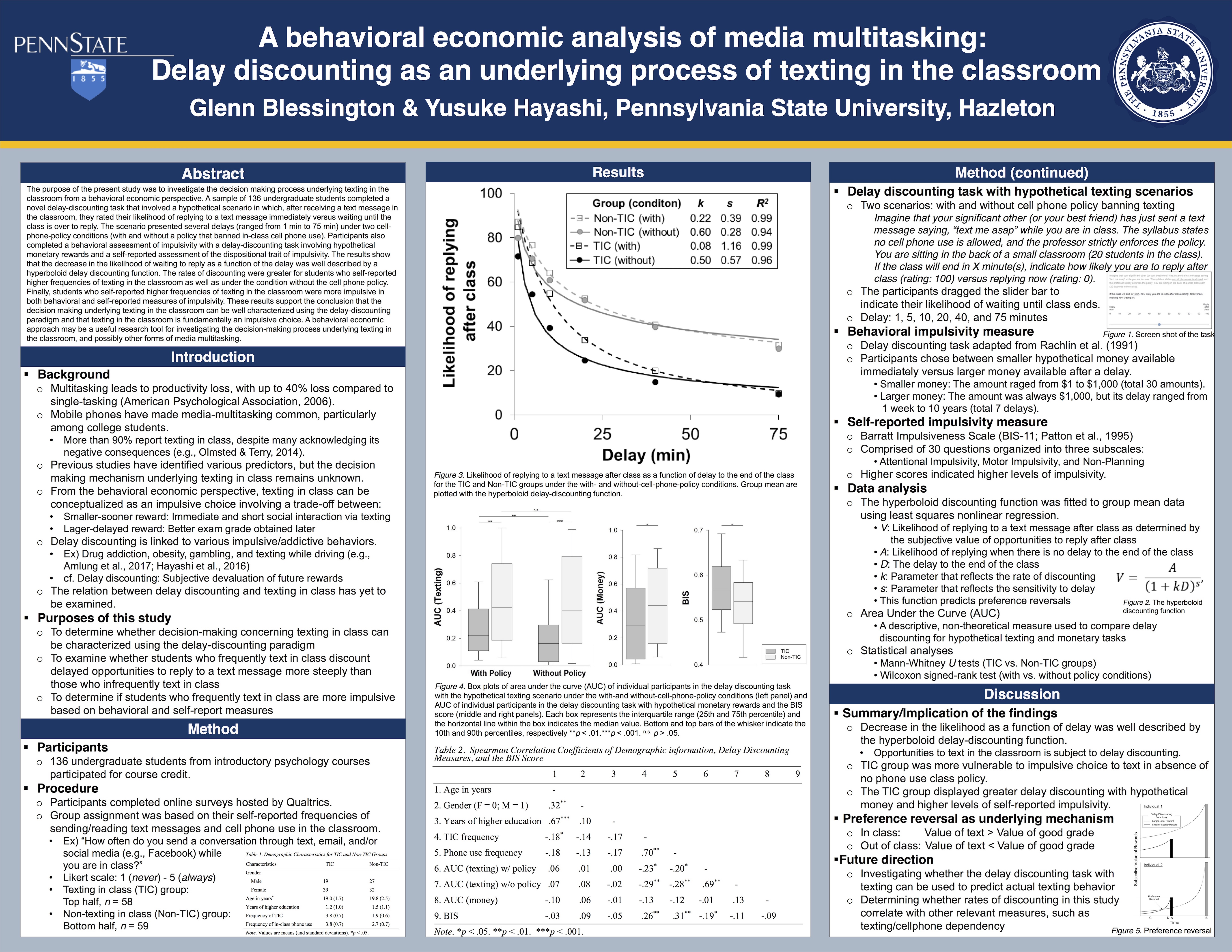 A Behavioral Economic Analysis of Media Multitasking: Delay Discounting as an Underlying Process of Texting in the Classroom by Glenn Blessington 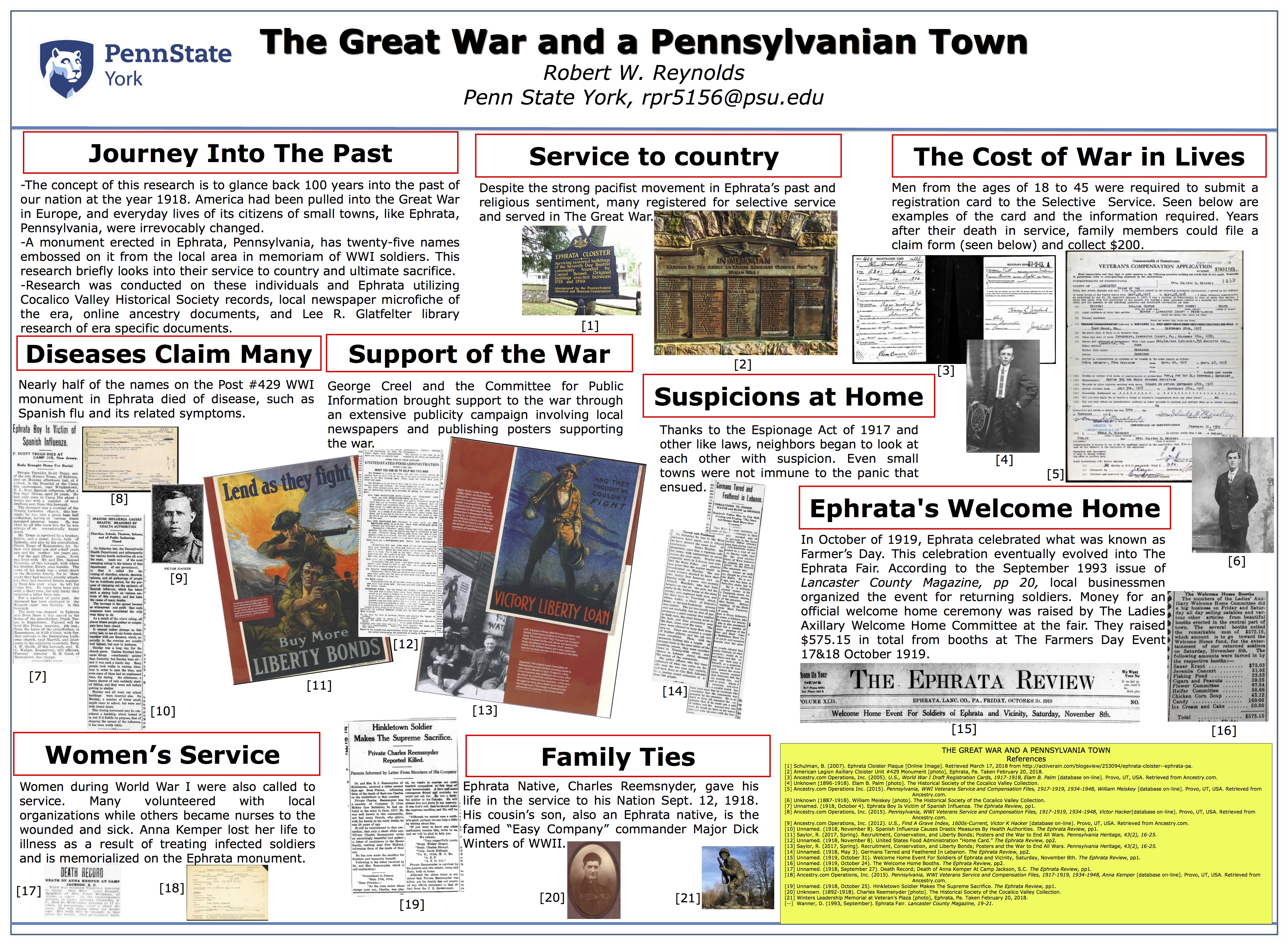 A Look into the History Of Ephrata, Pennsylvania, During The Great War by Robert Reynolds

The summer of 1914 was shaping up to be one of society’s most grand on record, yet the political grievances and secret ententes between European nations were escalating at a frantic pace. Archduke Franz Ferdinand was assassinated in Sarajevo and the long anticipated war among nations was given the necessary spark to begin. The United States President, Woodrow Wilson, made strenuous efforts to remain out of the Great War, yet was ultimately enveloped into the struggle in April of 1917. The impact was felt immediately as small towns across America gave up their sons and daughters to the service of their country. A typical example of this small town support is Ephrata, Pennsylvania, where twenty five World War I service members offered the ultimate sacrifice. Their names are now listed on the American Legion Cloister Post #429 Monument. Ephrata, Pennsylvania, known for the colonial era pacifist religious experiment of the Historic Ephrata Cloister, has served its country every time it has called. From supporting a casualty hospital during the battle of Brandywine, to providing one of the military’s greatest heroes of World War II, Major Dick Winters, Ephrata’s citizens have provided for the country it serves each time it was needed. This study is an attempt to bring forth the story of those Great War veterans through research of military and town records on the centennial of their deaths. The rediscovery of their lives and sacrifices provide a testament to the will and commitment of communities throughout our nation. 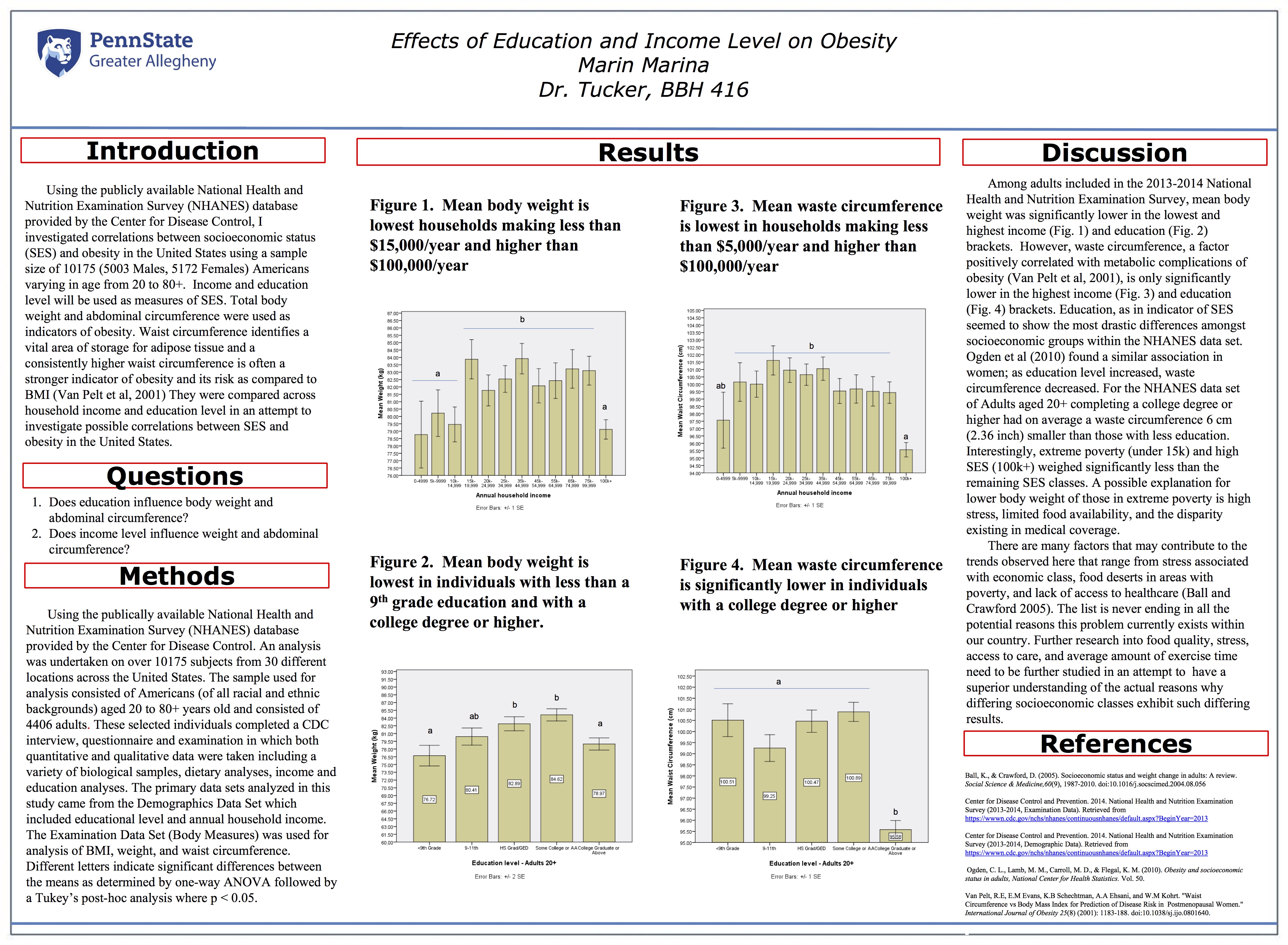 Effects of Education and Income Level on Obesity by Marin Marina

Using the publicly available National Health and Nutrition Examination Survey (NHANES) database provided by the Center for Disease Control, I investigated correlations between socioeconomic status (SES) and obesity in the United States using a sample size of 10175 (5003 Males, 5172 Females) Americans varying in age from 20 to 80+. Income and education level will be used as measures of SES. Total body weight and abdominal circumference were used as indicators of obesity. Waist circumference identifies a vital area of storage for adipose tissue and a consistently higher waist circumference is often a stronger indicator of obesity and its risk as compared to BMI (Van Pelt et al, 2001) They were compared across household income and education level in an attempt to investigate possible correlations between SES and obesity in the United States.