A guide for locating nursing information resources for nursing education, practice and research.

Levels of evidence are assigned to studies based on the methodological quality of their design, validity, and applicability to patient care. The combination of these attributes gives the level of evidence for a study.  In nursing, the system for assigning levels of evidence is often from Melnyk & Fineout-Overholt's 2011 book, Evidence-based Practice in Nursing and Healthcare: A Guide to Best Practice.  The Levels of Evidence below are adapted from Melnyk & Fineout-Overholt's (2011) model. 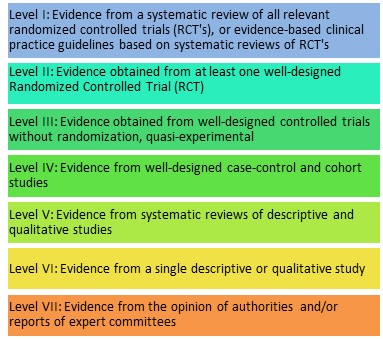 For example: a case series observed in 1961 in which two physicians who noted a high incidence (approximately 20%) of children born with birth defects to mothers taking thalidomide resulted in very strong recommendations against the prescription and eventually, manufacture and marketing of thalidomide. In other words, as a result of the case series, a strong recommendation was made from a study that was in one of the lowest positions on the hierarchy of evidence.

Hierarchy of Evidence: Qualitative and Quantitative