A guide to resources related to environmental history that are housed in the Eberly Family Special Collections Library. 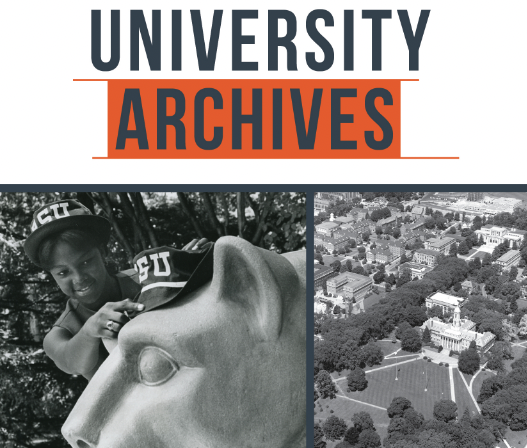 The collection consists of research materials relating to the early commercial oil and gas industry in New York and Pennsylvania, and includes materials documenting production, refining, pipelines, transportation, and biographies of individuals involved in the oil business. Materials range from 1797-1963, with the bulk being from 1930-1949.

This web archive documents Pennsylvania's experience with contemporary natural gas development enabled by a process known colloquially as fracking. Because the communities most directly impacted by natural gas development are least likely to have their experiences formally documented in archival repositories, the emphasis of this web collection is on resources created by and relating to grassroots, local environmental advocacy groups in Pennsylvania.

The Petroleum Refining Laboratory began in 1931 under the direction of Merrell Fenske. It gained international recognition for research resulting in the conversion of heavy viscous oils into marketable products. The Laboratory merged with the Department of Chemical Engineering in 1959, which joined the College of Engineering in 1963. This collection of the Pennsylvania State University Petroleum Refining Laboratory contains research and progress reports, meeting minutes, technical data books, correspondence, and information on research with the military, various chemical, oil, electrical, and auto industries.

This collection documents the career of Penn State professor of nuclear engineering Forrest J. Remick, including research administration records, and national and international policies for nuclear regulation. Included are correspondence, reports, records, and some manuals and publications, 1956-2005.

The collection contains records from the American Nuclear Society kept by Warren F. Witzig between 1954-1995 including meeting minutes, bylaws, rules, and a history of the society. The collection also contains Betacam videos recordings of the Society's 1980 "Enhanced Reactor Safety" conference dedicated to studying the findings of the accident at Three Mile Island, featuring a plenary panel presentation and individual expert interviews.

Nunzio J. Palladino came to Pennsylvania State University in 1959 as a professor of engineering. He served as dean of the College of Engineering from 1966 to 1981 after which he chaired the Nuclear Regulatory Commission until 1986. The papers document the college and Penn State's role in the Three Mile Island nuclear power plan. Materials include meeting minutes, publications, papers, articles, presentations, reports, budget materials, correspondence, course materials, newsletters, and research materials.

This collection contains the decommissioning plan for the United States’ first commercial nuclear reactor, in Beaver County, PA. The plan is comprised of 11 volumes, and was prepared by Burns and Roe Industrial Services Corporation and Nuclear Energy Services for the U.S. Department of Energy.

Warren F. Witzig was professor of engineering and nuclear power at Pennsylvania State University. Travel diary from Professor Witzig's travel to Russia and Ukraine to visit the Chernobyl nuclear reactor site shortly after the dissolution of the Soviet Union. Includes Witzig's technical observations of Chernobyl as well as cultural and personal reflections. Various documents laid in, including a pamphlet, Research activity, from Chelyabinsk State University, 1992 (in English and Russian; one additional page of handwritten note, Kyiv, dated Tuesday PM (likely either 1992 June 16 or 23); and letter from Witzig to Ambassador Robert S. Strauss, 1992 May 4, concerning his upcoming trip to Moscow and Ukraine.

Frederick H. Morse worked for the U.S. Department of Energy in the 1970s and 1980s. This collection consists of 47 reports related to solar energy studies conducted by Dr. Frederick H. Morse in conjunction with several different research groups, mainly during the 1970s. The collection also contains printed PowerPoint presentations from the early 2000s and 35 mm slides depicting solar energy projects prior to the 1990s.

Russell Ohl, a 1918 graduate of the Pennsylvania State College, conducted research in the field of chemical engineering and physics. His research led to the invention of many items, most notably the silicon solar cell, which is central to solar photovoltaic energy production. The collection includes technical memoranda, letters and notes, drawings, charts, graphs, experiment data, and published papers concerning his research, especially with silicon.