After a difficult and contentious 2016 election, this guide creates a supportive virtual space to explore, learn, and discuss ideas brought up in the election and the ideas we grapple with after.

Leading up to the election, many people made their own predictions on how the electoral votes would shake out. These predictions seem to be more popular than the actual map.

Use the Google search bar below to search for "Final 2016 electoral college map" or something along those lines. Limit your results to images and take a look at the maps that appear. What sort of results do you get? What sources are they coming from and who has "won" the election? How long does it take to find the map you see on the right?

What is the electoral college?

The 270 refers to electoral college votes a candidate needs to win the presidency. There are 538 electors across the United States -- 435 representatives, 100 senators, and 3 electors from the District of Columbia ("Decoding the Electoral College," Gale Virtual Reference Library).

Remember: every state gets 2 senators and then the number of representatives is decided based on the population in the state. This is why California (55) and Texas (34) both have more electors than Alaska (3) ("Electoral College, Gale Virtual Reference Library).

From The American Presidency Project 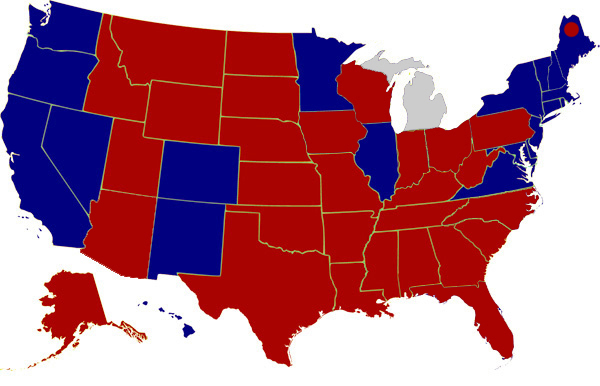 The American Presidency Project is a website (see below) that is both a non-profit and non-partisan platform to showcase documentation and results from presidential elections. It is interesting to see the shift over time and how the United States' overall political leanings change. What states seem to stay the same color year after year? Which ones go back and forth between blue and red?

Every presidential election year, we see the map below. Recently, there has been some talk of changing it so we can actually see the weight of electoral votes, as opposed geographic layout of our country. We will see if any changes occur by 2020.

Video from Vox by Liz Scheltens